Because of the increased popularity of the Hoefslag Festival and a similar increase in number of spectators, the organisers have decided to run the event over two days instead of one in future.

This festival, which took place between Koster and Lichtenburg, drew a record crowd of 4,500 spectators. Next year it will be the tenth time this event is being held.

”The main purpose of this event is horse breed and stud promotion, and that will be built upon in future”, says the owner of Geyerspan, Mr. Piet Botha.

Due to the venue and the increasing need for overnight facilities, a ‘’five star” caravan park is being considered for future festivals on the farm.

A freak accident during this year’s festival, in which a rodeo mare broke her leg, and had to be put down by an official of the S.P.C.A., is being described as “heart braking” by the organisers of the festival.

“It is the first time in sixteen years that a horse has been injured in a rodeo in our country. Injuries like this occur in almost any form of equine sports globally”, say the organisers.

With that in mind, the organisers have decided that, should they have rodeos during future events on the premises, it will only consist out of bull riding competitions.

Among the riders from North West who competed against the best in the country, a young rider of Geyerspan, Rynhardt van Zyl, came out tops and accomplished the virtually impossible. After only his second participation in a rodeo competition of RodeoSA, he is now among the Top Ten riders in the country. 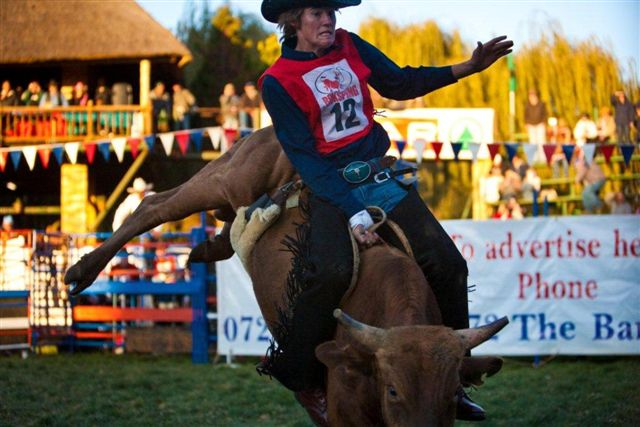 The festival was once more characterized by spectacular horse exhibitions, with horses and ponies of various breeds. From elegant pitch black Friesians to Hackney Ponies and small Miniature Ponies were on display.

Exhibitions by indigenous breeds, such as Nooitgedachter and S.A.Boerperd, were extremely popular with the public, while 450 Friesians and Friesian crosses of Geyerspan, appearing in the arena simultaneously, as well as riders in colourful costumes, were an unforgettable experience. 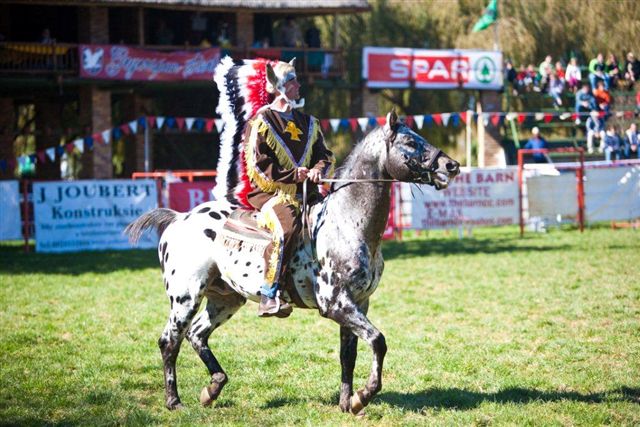 Armand van der Merwe of Rustenburg created just the right atmosphere for the rodeo which followed shortly after this, as a Singing Rider. 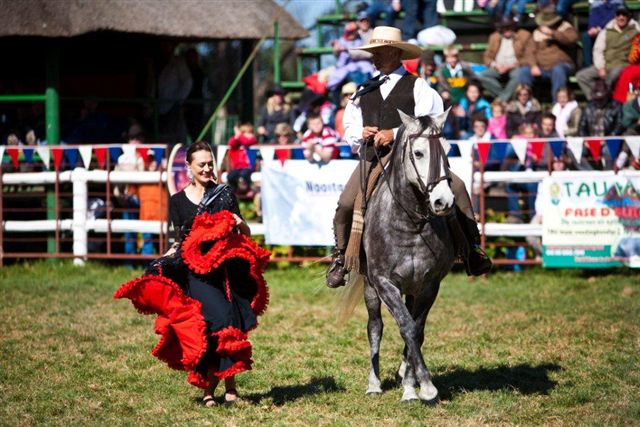 William and Bonnita Bondieso of the Lekkerkry Nooitgedachter Stud near Warmbad entertained the crowd on Spanish elegance with their gelding, Lafras.

Another highlight was the veneration of a number of pioneers who have been pioneers in various fields. One of them is the 83 year old Mr. Johan Basson of Potgietersrus who, with his family, has played a significant role in the improvement of the Afrikaner Cattle breed. He still strives for the production of better quality meat for the consumer.

The well known pioneer and performer in the sport of carriage driving, Mr. Rodney Foster of Johannesburg, and Mr. Kallie du Preez of Parys were also venerated. Mr. du Plessis was well known in the area of game conservation and the tracking down of terrorists in the former South West Africa.

During this event tribute was also paid to three Springbuck rugby players of bygone days, viz. Frik du Preez, Joggie Jansen and Thys Lourens. Frik and Joggie are also familiar figures in horse circles. First named were one of the founders of the annual Bray July Horse Race, while Joggie has participated in numerous endurance rides. 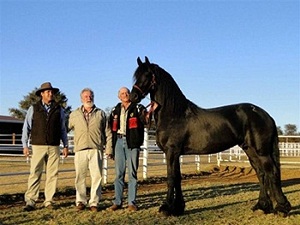 The highest price ever for a Friesian horse on a local sale has been realized at the elite sale during the Hoefslag Festival at Geyerspan. An imported stallion from the renowned stud on this farm, outside of Koster, was sold for one million Rand.

This stallion, Auke V, which has just turned three, has only recently been imported from the Netherlands by Geyerspan’s owner, Mr. Piet Botha. The new owner is Mr. Niekie Pienaar of the equally famous Adelprag Stud just outside of Potchefstroom.

Botha, who has imported more than forty horses over the past two decades, reckons Auke V is one of the most excellent stallions which he has yet brought into the country. When he saw him for the first time in the Netherland at the age of four months, this foal already impressed him. “This is a line bred horse, and his front and hind action is not to be seen anywhere in the country. Above all he has the most wonderful disposition”, says Botha.

Auke V, whose sire is Harmen424 and whose dam is Lea Nadine V, was bred in the stud of G.A.Vergossen of Koningsbosch in the Netherlands.

With Auke V Botha brought another outstanding stallion into the country, viz. Arnt, a full brother of the former and current National Grand Champion Stallions of the Friesian Horse Breeders’ Society of S.A. Both these stallions, which have also been imported by Botha – N Teun and Teun N – have already been in the stables of Adelprag Stud for a long time.

At the sale on Geyerspan, which was conducted in the presence of thousands of people, Mr. Willem van Aardt fetched R60,000 for a Friesian stallion, while the Asad Arabian Stud received R12,000 and R9,000 for a stallion and a mare respectively.

The auctioneer was Mr. Hendrik Nel of Clive Gardner Auctioneers of Potchefstroom.

Shortly after the sale Mr. Botha sold a Nokier mare which he imported from Austria for the first time, out of hand to Mr. Lukas van der Merwe of Randjiesfontein, .With this sale Mr. van der Merwe became only the third owner of this medium heavy draught horse breed in the country. He paid R120,000 for the four year old mare, Paula, and her first progeny. 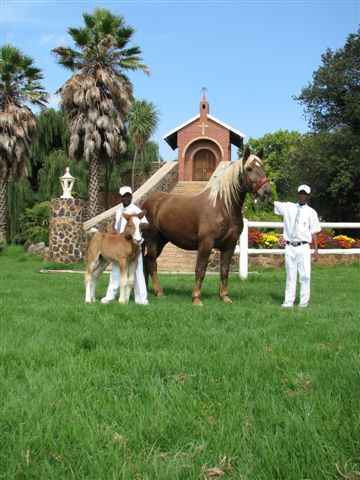